Auto Sales Up: Dealers Should Thank the U.S. Government (But They Won’t)

The New York Times reported this week that “October was the best month for new-vehicle sales in more than two years, outside of the brief period in 2009 helped by government rebates.”

Sales for the auto industry were up 13.4 percent over all from a year ago.  Sales for General Motors rose 4.2 percent, sales for Ford Motor Company were up 19.3 percent, and sales for Chrysler jumped 37 percent.

General Motors’ vice president for sales, Don Johnson, was confident that the American Auto industry has recovered from the economic crisis that left them on the brink of total collapse less than two years ago; “Signs are there that the recovery continues and that it will be sustained,” said Johnson. “We don’t see a big risk at all of a double dip.”

It looks like federal intervention saved the U.S. Auto industry.  You would think that American auto dealers would be grateful — out of patriotism or self-interest or both.

Those U.S. flags they like to wave at auto dealerships don’t mean “thank you.”

Instead of thanking the federal government, auto dealers continue to be  some of the largest contributors to far-right, anti-government Republicans, who rail against the very programs that pulled them from the brink of collapse.

This right-wing, anti-government hypocrisy on the part of auto dealers is especially true here in Orange County, where auto dealerships — like Irvine Auto Center — have often served as staging locations for Tea Party rallies, and where our local  car-salesman-in-chief, auto dealer and Congressman John Campbell, continues to blast the federal government for providing the money that kept his family auto dealership alive.

Is Sarah Palin Coming to Your Neighborhood? (California, Here She Comes!) 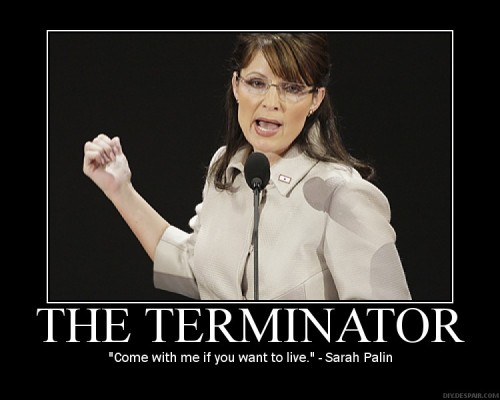 If I’m correct that Sarah Palin resigned as Alaska governor in order to lead a right wing movement that is ostensibly independent of the major political parties, then the next question is: where will she establish her new home and base of operations?

The Northeast is too liberal, the South is too connected to racial politics (and there’s too much competition for conservative leadership and not enough big money), Washington, D.C., is too much of an enemy camp, and the Midwest doesn’t have enough access to the media.

Texas is certainly a possibility, but I don’t think she’ll want to compete for power with the Bush clan.

Florida also is a possibility, but I don’t think she’ll want to compete for conservatives with both Jeb Bush and Charlie Crist.

And while Idaho might have the most ideologically receptive population, it is so far off the media radar that she might as well stay in Alaska.

And California has no nationally known conservative political figure (Arnold doesn’t count) to offer her any real competition.

In fact, the California Republican Party is so fractured because of the budget battle and the hang-them-all ideology of its tea party militants that the Republican establishment wouldn’t be able to offer any real competition to Palin’s brand of radical right-wing conservatism.

It might be very bad news for more moderate Republicans like Meg Whitman and for the statewide chances of the Republican Party, but you can bet that John and Ken would welcome her with open arms (and air waves).

Are you ready for the new Terminator?

Democrats Should Be Joining the Tea Parties 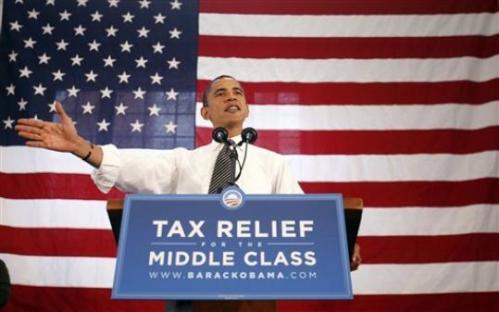 Democrats are responding to the growing nationwide phenomena of anti-tax “tea parties” protests by mocking them and by pointing out that they are prompted and run by right-wing organizations.

Neither response is a winning political strategy.

It is pure political stupidity — and bad economic policy — for Democrats to treat the tax protests with derision or contempt.

Rather than mocking the aims of the tea parties, Democrats should follow the lead of presidential candidate Barack Obama, who promised to “provide a tax cut for working families” and “restore fairness to the tax code and provide 95 percent of working Americans the tax relief they need.”

Obama also promised to provide tax relief for small businesses and startups by  eliminating “all capital gains taxes on startup and small businesses to encourage innovation and job creation.”

What Obama recognized – and Democrats already seem to have forgotten – is that working families are in fact being over-taxed while the super rich have gotten a free ride – and that voters will cast their ballots for the party and the candidates who they believe will create a fairer tax code and reduce their tax burden.

And while it is certainly legitimate to point out that the anti-tax tea parties are being manipulated and guided by right-wing groups and talk-show hosts whose agendas are not the same as working and middle class voters, this point is devoid of political impact unless it is accompanied by a commitment to do a better job than these groups of protecting working class and middle class economic interests.

For too long, Democrats – especially in California – have allowed Republicans to dominate and set the terms of the tax debate.

As a result, Democrats have allowed Republicans to paint them as the party of higher taxes – and have allowed the super rich to pretend to defend the economic interests of working families and the middle class while in fact shifting the costs of government to those who are least able to afford it.

Instead of responding to the tax protests with mockery and contempt, Democrats need to insist on talking about the kinds of taxes that the government imposes and who pays them.

We should insist that all taxes be progressive and focused on overturning the Republican’s outrageous favoritism of the super rich.

Especially in the midst of the current recession, we should oppose any increases whatsoever in regressive taxes – such as the sales tax, the automobile tax, and the gasoline tax – that disproportionately hit working and middle class families, unless and until the state and federal tax code is revised to require that the super rich pay their fair share.

Of course these tax protest “tea parties” are a Republican sham — the Republican anti-tax activists not interested in reducing the tax burden on the middle class and working families, but in keeping the Bush tax breaks for the rich — but that does not mean that the underlying middle class protest — even rage — at their tax burden should be ridiculed. On the contrary, it means that the Democrats should insist on seizing the debate and turning it against the Republicans — as Obama did.

Democrats can win the tax debate – if they take the tax protest “tea parties” seriously.

Why I Love Conservative Talk Radio’s John and Ken Show